First off, I would like to address the controversy that has been circulating among my adoring followers: What you are in fact reading is a 'blarg'.

I will address any further questions by way of a short reading from The Blargonicals:

Let there be LIGHT
And the blargoverse was lit.


[from The Blargonicles 1:1]
So I've got this new insane place called a blarg... or blahg... or some would mistake if for a 'blog'. It's basically a place where i can write insane things and they will seem normal. This is because A) this blarg is insane, and B) Because hardly anyone reads it. Context is everything. (You have to know this if you are a squirrel, they talk about nuts all the time) 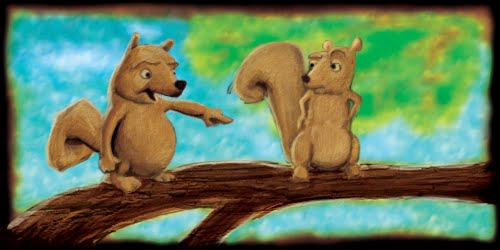 HES LOOKING FOR HIS OTHER NUTS BARNEY!
In other news, the secret to happiness was recently discovered by a team of scientists in Switzerland. Their research involved extensive testing in the fields good food, regular physical activity, isolation from difficult tasks, alcohol and the company of the opposite sex. The research institution funding the project has been unavailable as yet to elaborate on any findings.

In an interview with one of the research team, Mr Gustav made the following comment "It is like 11 secret herbs and spices... you can make it yourself, but if it is not secret, it is not the same". Without further explanation and after removing his left shoe, Mr Gustav left the interview.

More on this report as it becomes avaliable.

Tune in again this time tomorrow morning for the latest update on pandas and such. Goodnight!
Excreted by Unknown at 20:52 0 comments


Out there, in the wide open universe there is a particular star. A star not unlike our own. It's not anywhere in this galaxy, or the next, or the one after that. In fact its so far away that nothing no matter how fast it could travel could reach it given even a sizable portion of 'forever'. So far away in fact ,that you could almost say that its not part of the same reality we are in now. Almost.

There is a gas giant orbiting this star. The giant its self is entirely unremarkable; very big, very round, and very blue. As the reader begins to get bored, by the unremarkable planet, their attention is drawn to a small moon just beside it. A dark shape just barely visible in the glare from the star in the background.


As the reader is most eloquently narrated towards the surface of the moon it becomes clear that something must be quite remarkable about it. After admiring a final profound description of the barren alien landscape the reader arrives in a small crater about the size of the average backyard swimming pool.

At the bottom of the crater in the very center is a rock. A perfectly round rock. Evidently the cause of the small crater. As the reader peers over at the curious object, they find on the very top of the sphere a small inscription on a polished square of metal:
"So. In no particular order, let's begin."
Why it was written in English is anyone's guess.
Excreted by Unknown at 22:47 2 comments

Who is this genius blogwriter?

People who agree that I'm amazing: